The Republic of Korea (or Korea for short) is an East Asian country with a rapidly developing economy. It has beautiful natural scenery and a favorable temperate climate. This beautiful country is still imbued with the unique traditions of Eastern culture. As a result, Korea has become one of the favorite countries of many tourists, especially to admire the achievements of the development of big cities. In this article, let’s study abroad with Sunny to learn about the Top 5 major cities in Korea: Seoul, Busan, Daegu, Incheon, Gwangju.

Seoul, Korea – The most livable city in Korea

Seoul is the capital of Korea, which is considered the most livable city in the “country of kimchi”. Seoul, South Korea has an area of ​​605.2 square kilometers. Located on the romantic Han River, Seoul plays an important role as a center of comprehensive development, strong in politics, economy, culture and education.

Seoul is one of the 10 largest cities in the world, unique with features for the past and present coexisting. From palaces, temples, and mausoleums, priceless art collections represent a glorious past, to glittering skyscrapers and bustling transportation systems represent a vibrant present. .

The capital Seoul is the economic center of Korea because it is home to the headquarters of the world’s largest corporations such as Samsung Group, LG Hyundai and Kia Motors… The service and tourism sector in Seoul is special. special development, contributing to the national economy as well as the development of the country.

Compared to other Korean cities, Seoul is considered the top tourist destination of Korea. If you are passionate about Korean history and culture, the Korean War Museum, Namsan Tower, Gyeongbokgung palace, Bukchon Hanok ancient village … will be destinations that you cannot ignore. Seoul is also a paradise for shopaholics. Gangnam-gu, home to the Korea World Trade Center and COEX Mall, one of the busiest indoor shopping and entertainment centers in Korea. Seoul is also a city with many notable projects such as the Olympic Stadium, Lotte World Olympic Park in Songpa-gu, Korea Finance Building, N Seoul Tower, and Seoul World Trade Center. house 63,…

Busan city is located in the southeast of Korea. This is the largest port city in Korea with an area of ​​767.4 square kilometers. The development of the seaport contributes to promoting logistics activities, facilitating the trade of goods both at home and abroad.

Busan is the second largest Korean city after Seoul. The most populous areas are built in narrow valleys located between the two rivers Nakdong (Lac Dong) and Suyeong (Thuy Doanh) interspersed with mountain ranges. However, the developed traffic conditions with the public transport system, international airport, and advanced and modern subway system are a big plus to attract tourists.

Transportation and shipbuilding are two key economic sectors of Busan city. Since 1978, Busan has opened three major ports including Jaseungdae (Zicheng Dai), Shinsundae and Gamman. Busan is known as one of the world’s largest seaports and handles up to 13.2 million TEUs of container cargo annually.

Not only is it one of the largest economic centers in Korea, Busan is also a famous tourist city, especially for sea tourism. The beautiful natural scenery and temperate climate are favorable for maritime activities and tourism. Busan city is known as the summer capital of Korea with many beautiful beaches, the most famous of which is Haeundae beach (Hai Van Dai) with tourist destinations and busy commercial centers. In addition, Busan is also known to tourists by many other names such as the city of Camellia trees, the city of seagulls Seagull… All of these are images that symbolize the hospitality, will and strength of the city. local people.

Busan is the venue for a series of important international events such as the 2002 Asian Games and the 2005 APEC conference in Korea. The city is also famous for the Busan International Film Festival, one of the largest film festivals in Asia, or the biennial Busan Biennale International Contemporary Art Festival that attracts many famous artists. and a large number of tourists visit this city.

Incheon is on the list of major cities of Korea that welcomes the most tourists every year. Incheon has an area of ​​1,029 square kilometers and is the third largest city in South Korea, 28 kilometers west of Seoul. Incheon is the gateway to the cities of South Korea under the central authority, where the port of Incheon and Incheon International Airport are located, the most modern and famous in Northeast Asia.

Incheon was once an unpopulated area and only suddenly became busy since Jemulpo Port was built in 1883. Historically, Incheon has played an important role in Korea’s development through through opening the port to the outside world and modernizing it into an industrial center. In 2001, Incheon International Airport officially opened at Yeongjong Island, marking a new development step, turning Incheon into an international city.

Economically, Incheon is a busy port city, owning the largest seaports among seaports in Korea. The bustling trade activities have contributed a lot to the economic development of the city in particular and Korea in general. Along with strong investment, Incheon promises to become the central city of the world in the 21st century.

In particular, Incheon city is known as the “Tourist City” with a huge number of tourists flocking here every year. Incheon has many famous tourist attractions from large and small islands, high tide land to beautiful parks and ancient ruins. Famous Incheon tourist attractions can be mentioned as Incheon Bridge, Bumujin in Baengnyeong Island, Muui Island, Wolmido Park, Ganghwa Mud Hole, etc. Incheon is also the venue for many large-scale international conferences such as: 2009 Incheon Global Fair and Festival, 17th Asian Games,…

Daegu city is a typical city in the central provinces of Korea, the provinces of Korea. Located 300km southeast of Seoul, Daegu is the fourth largest city in Korea with an area of ​​883.6 square kilometers. Daegu city is considered the capital of Gyeongsangbuk province – the central province of Korea, although administratively Daegu is no longer located in this province.

Daegu’s main economic sectors are textile industry, metallurgy, and machine building. Many large factories and industrial zones are concentrated in the western and northern areas of this city. Notably, starting in the late 1990s, the central and local governments, based on the Italian city of Milan model, proceeded to build and develop the textile industrial park of Daegu with the slogan “Daegu: Fashion City”. Thanks to the efforts to promote the fashion industry to the world, the clothing manufacturing sector as well as the textile industry in Daegu especially developed and contributed to the national economy. Convenient highway and train systems contribute to making Daegu an important traffic hub, connecting with major cities across the country.

The beautiful city of Daegu is also an interesting stop in the provinces in Korea that visitors can explore. Daegu is the living embodiment of culture with traditional Korean charms. It is home to many modern historical sites of “the land of kimchi”. Some famous tourist attractions in Daegu include Woobang Tower, Daegu Apsan Park, Yugasa Temple, Palgongsan Mountain, Kim Gwang-suk Road, etc.

Gwangju city is one of the major cities in Korea. Central GwangJu is Korea’s sixth largest and is located in the central southwestern region of Korea. Gwangju covers an area of ​​501.2 square kilometers, famous for its beautiful natural scenery and good climate. “Gwang” in the name of the city means “light”, and “ju” means “province”. Therefore, Gwangju is often known as the familiar “City of Light”. This name contains the expectation and belief about the southern land of Korea that always shines.

Gwangju has a terrain that is mainly plain, convenient for traveling, with hills and rivers spread everywhere. It has a warm climate with moderate humidity and rainfall. Compared to other provinces of Korea, Gwangju has advantages in topography and climate, so Gwangju’s agriculture is extremely rich, especially rice and clean vegetables. This is also the location of an industrial complex that produces automobiles and machinery of the largest Korean corporations such as Hyundai, Daewoo, Kia, etc. 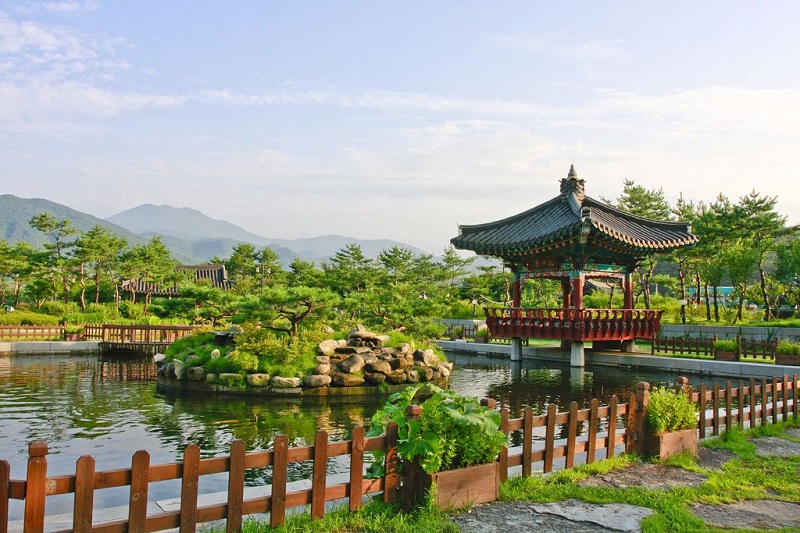 Gwangju city is also one of the cities in Korea that attracts many domestic and foreign tourists because of its beautiful natural scenery and convenient transportation system. The city is noted for its ancient architecture along with heroic historical feats. Some attractions that you should not miss in Gwangju can be mentioned as Chungjang-ro, Gwangju Art Street, Sajik Park, Mudeungsan Peak, Honam region, Gwangju Kimchi Town, Gwangju Family Land, etc.

In addition to unique tourist destinations, Gwangju city is also known as the “cradle of Korean cuisine” with a rich culinary culture. Gwangju is home to a large-scale concentration of typical Korean dishes with top-quality ingredients. Typical dishes such as Tteok-galbi (Rice cake with ribs), Boribap (Barley rice), …

The economic and cultural development of Korea has contributed to bringing the country’s image closer to international friends. “How many provinces does Korea have?”, “The big cities of Korea?”… became the most searched questions. Above are the Top 5 major cities in Korea that Sunny would like to introduce to you. The remarkable development of Korea’s major cities has confirmed the country’s position more than ever.

No comments to show.