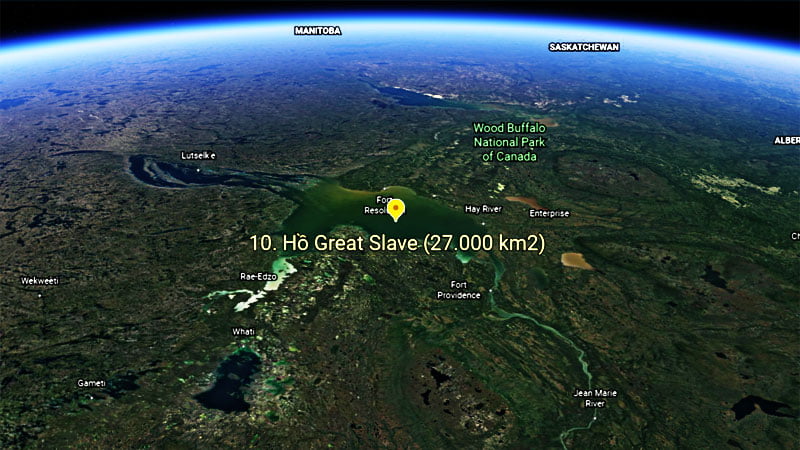 In this article, we have listed the 10 largest lakes in the world when measured by total surface area, from smallest to largest.

There are hundreds of lakes around the world that claim the title of largest lake of some kind – by volume, surface area or a multitude of other defining standards and considerations.

In this article, we have listed the 10 largest lakes in the world when measured by total surface area, from smallest to largest. From the Great Slave Lakes in North America to the Caspian Sea that stretches across continental Europe and Asia, these are the largest bodies of water on Earth.

Great Slave Lake is the second largest lake in the Northwest Territories of Canada, after Great Bear Lake. With an incredible depth of more than 600 meters, it is the deepest lake in North America. Spanning nearly 300 miles and over 100 miles wide, it is the tenth largest lake on Earth.

Due to its location south of the Arctic Circle, the lake freezes over in the winter and maintains temperatures so cold that residents can create a road across it, a shortcut between Yellowknife and Detah, two The towns are located opposite each other across the lake.

The rest of the year, the lake is a hotspot for sailors and anglers who like to try their luck to fish for pike and trout in the lake or arctic grayfish in its tributaries.

Spread across Tanzania, Malawi and Mozambique along the East Coast of Africa, Lake Malawi – also known as Lake Nyasa – is the third largest lake on the African continent. One of the Great Lakes in Africa, the sprawling Lake Malawi has many claim to fame.

It is the fourth largest lake on Earth by volume, the ninth largest by area, and the second deepest lake in Africa. It is not simply its sheer size that makes Lake Malawi special, but also the life it sustains.

Lake Malawi is home to more fish species than any other known lake – hundreds of cichlids in particular. While fishing is allowed in some places, various areas have been designated as marine reserves to protect these creatures.

Located in Canada’s Northwest Territories on the Arctic Circle, Great Bear Lake is the eighth largest lake on the planet. It is also the largest freshwater lake located entirely within Canada’s borders, and the fourth largest in North America.

The lake is more than 440 meters deep at its deepest point, surrounded by forests and tundra and known for its crystal clear waters. While the lake is home to spotted trout and several other marine species, it has the fewest fish species of all of Canada’s Great Lakes.

Lake Baikal in Russia is the largest lake on Earth by volume. At more than 1,632 meters deep, it is both the deepest and the oldest lake in the world, with many arguing that it should be considered a sea.

This is supported by the fact that it is one of the only lakes with enough oxygenated water to sustain life at its deepest depths. The lake is home to about 1,700 species of flora and fauna.

A total of 27 islands can be found in Lake Baikal, most of which are uninhabited. It also has hundreds of rivers and streams flowing into it, and one river – the Angara – flows out of it and into the Arctic Ocean.

Lake Baikal is one of the clearest lakes on Earth, filled with snow from the mountains of Siberia. On a clear day, the lake has a view of 39 meters deep!

One of the great lakes in Africa, the aptly named Lake Tanganyika – which means ‘great lake spreading like a plain’ – is the longest, second oldest and second deepest freshwater lake in the world. It is also the second largest lake by volume.

Flowing between the four countries of Tanzania, Burundi, Democratic Republic of the Congo and Zambia, Lake Tanganyika eventually empties into the Atlantic Ocean. Forming one of the lakes in the Rift Valley, swimming in the lake is not recommended as Nile crocodiles are said to lurk below the surface in some places.

Lake Michigan, also known as ‘The Great Body’, is one of the Five Great Lakes of North America. It is the second largest by volume and the third largest by surface area.

With a maximum depth of 280 meters, it is the only Great Lake that lies entirely within the borders of the United States – spreading across Michigan, Indiana, Illinois and Wisconsin from east to west.

Swimming in Lake Wisconsin is risky for a number of reasons. The coast not only has dangerous currents, but the bottom is often uneven with holes and reduced depths while few lifeguards are available.

Connected to Lake Michigan by the Strait of Mackinac, Lake Huron is the fourth largest lake in the world. It is also the second largest lake by surface area and the third largest by volume of the five Great Lakes in North America.

Stretching over 3,800 miles, Lake Huron has the longest coastline of all the Great Lakes and includes more than 30,000 islands.

Lake Michigan is famous for many shipwrecks. Thousands of sunken ships lie off the coasts here. Fathom Five National Marine Park is home to 22 wreck sites.

As the main reservoir of the Nile, Lake Victoria is home to more than 200 different species of fish, including tilapia, which provide a livelihood for thousands of people living on and near its shores.

Named after Queen Victoria of England by John Hanning Speke, who first recorded the lake in the 1850s, Lake Victoria is noted as the most dangerous lake in the world. It sees the highest number of deaths each year, caused by black spots, changing weather conditions and crocodile attacks.

Lake Superior is the largest freshwater lake in the world by surface area, the third largest by volume, and the largest, deepest, and coldest of the Great Lakes of North America. It is also Canada’s largest lake, bordering the US states of Minnesota, Wisconsin and Michigan.

Lake Superior, which means ‘Great Sea’, is a prominent hot spot on the Great Lakes Waterway, transporting goods and materials across the water. However, because it is more than 400 meters deep in some places and very susceptible to solids, it is one of the most dangerous lakes to swim in on Earth.

Despite its misleading name, the Caspian Sea is actually a lake because it is entirely inland – in fact the largest lake or body of water in the world. Located between continental Europe and Asia, this inland sea is bordered by Russia, Kazakhstan, Azerbaijan and Turkmenistan.

Interestingly, the lake is not freshwater; it is partially salty, though only a third as salty as sea water, as it once formed part of the ancient Paratethys Sea. Today, the sea is famous for its excellent caviar and outstanding oil industry. What are the most populous cities in the world? Here is a list of the […]

The largest lake in the world: What are the top 10 lakes, where?

In this article, we have listed the 10 largest lakes in the world when measured […]

Top 10 most populous countries in the world, updated to 2022

The top 10 most populous countries in the world are mainly concentrated in Asia, and […]